We may be Godless, but that doesn’t mean that we don’t know how to party. For the last two years, we’ve helped the non-believer community celebrate the winter holidays in a secular fashion by holding the Godless Perverts Holiday Fun Time, a social event complete with icebreaker games, weird songs, and decadent desserts. We’re having it at Borderlands Café this year, a magnificent community space, and we’ve got a lot of great uses planned out for it.

We’ll have our usual silly icebreaker games, goofy but fun holiday songs (Walt Kelly’s “Deck Us All With Boston Charlie” is a perennial favorite), delicious potluck holiday treats (bring your favorite to share – we will!), and the pleasure of connecting with our fellow secularists. And this year, Greta’s going to be giving openly fraudulent Tarot card readings! She’s almost completely guaranteed not to tell your future (except by accident), but it’s just as sure to be a great deal of fun. It’ll be on Saturday, December 12, 8-11 pm, at Borderlands Café, 870 Valencia St. in San Francisco, near the 24th St. & Mission BART station.

This year, as you may know, we’re doing it a little bit differently. The Godless Perverts Holiday Fun Time is not only going to be fun, but it’s going to be a fundraiser for an organization that we’ve admired for a long time: The St. James Infirmary.

To do that, we’re trying to raise $700 to pay for space rental, refreshments, and assorted expenses of this year’s party. We’re just over halfway there, thanks to the generosity of some of you. As we get closer to our goal, we thought that it would be a good time to talk about the organization that we’re supporting this year, and why we think that they’re so awesome.

What is St. James Infirmary?

In a nutshell, the St. James Infirmary is an occupational health clinic run by and for sex workers. Founded in 1999 by members of COYOTE (Call Off Your Old Tired Ethics) and the Exotic Dancers Alliance, they remain the first and only of their kind. They provide sex workers of all genders with health care and counseling of all kinds, including primary care service, gynecological and urological medical care, STI testing and counselling, needle exchanges, and support groups. Trust us when we say that all of this work does much more for sex work communities than any of the various “rescue” operations (i.e. arresting sex workers for their own good), or john-shaming programs that are popular in mainstream politics.

Why Sex Workers Need Their Own Health Care Resources

Sometimes when people hear about St James, the first response is to ask why sex workers need health care resources especially for them. The simple answer is that even the most legal sex work – such as stripping or adult modelling – is heavily stigmatized. For that matter, sexual pleasure is heavily stigmatized. Most doctors aren’t trained in how to address human sexuality beyond matters of basic physiology, and certainly not in the day-to-day realities of sex work. Have you ever tried to talk to your doctor or a nurse about discomfort “down there” or problems with how your body feels during sex? For most people it’s an incredibly uncomfortable experience. Imagine the difficulty of doing that if you also add in the problem that your work is, by its nature, either illegal or socially condemned.

Those two tweets were like tossing a match into a room soaked in gasoline. Already two more adult stars have come forward saying that Deen assaulted them, and others have said that they had heard about his behavior before Stoya’s tweets and avoided working with him as a result.

Thankfully, a lot of people immediately showed their public support for Stoya and the other women through social media. But there’s also a lot of ferocious and vicious hatred being thrown her way by people claiming that she’s just telling stories on an ex. One of the most frequent questions that comes up – allegedly as a neutral inquiry, but more often as a dismissal – is: “This happened years ago. If it was so bad for her, why didn’t she go to the police instead of talking about it on Twitter?”

To anyone with even a passing familiarity with how rape survivors are treated by law enforcement, this question is already ignorant. But it becomes even more so when we’re talking about a woman who makes her living by having sex in front of a camera. The trial of former mixed martial arts fighter Jonathan Koppenhaver – otherwise known as “War Machine” – shows the horrible reality.

Koppnehavar is facing 34 charges right now in a Las Vegas court, including five counts of sexual assault and two of attempted murder. Most of the charges are based on his break-in at the house of his ex-girlfriend, Christine Mackaday, who used to work in adult films as Christie Mack. Koppnehavar beat Mackaday and punched and choked Corey Thomas, a friend of hers who was there at the time. The Las Vegas Review-Journal describes Mack’s injuries from the assault:

She suffered a blowout fracture of her left eye and several other broken bones in her face, two missing teeth, a lacerated liver, broken ribs and serious bruising in several places.

In court Monday, defense lawyers also argued that Mackinday’s work in pornography pointed to consent and that Koppenhaver and Mackinday often engaged in rough sex.

Mackinday’s career led to her “desire, the preference, the acceptability towards a particular form of sex activities that were outside of the norm,” [Defense attorney Brandon] Sua said.

“The jury needs to know the nature of this relationship, and what was customary and consensual,” Sua said outside the courtroom.

When that’s the kind of argument that can credibly be made in a courtroom, is it any wonder that Stoya and the other women speaking up about James Deen didn’t think that the police were a safe place to take their stories?

Even women with every conceivable privilege – of race, of sexual orientation, of class – report horror stories when they go to report sexual assault. They’re asked what they were wearing, if it really happened that way, if it happened at all, and if they are believed, they’re asked if they think that they really want to destroy that nice boy’s life because of one mistake.

Is it any wonder that Twitter was a safer place for Stoya than a police station?

St. James Infirmary: An Open Door When Others Are Closed 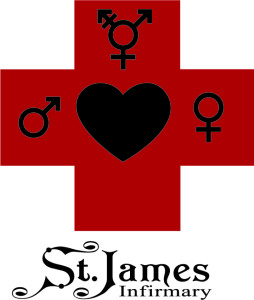 In a very roundabout way, that’s the story of why we want to support St. James Infirmary for the holidays: Because they provide an open door for people who find all other doors persistently closed to them. Because escorts, dancers, models, pro-dommes, and other sex workers can go to St. James and explain what hurts – physically or otherwise – without having to justify their lives to people who don’t have the background to understand anyway.

We’d want to help out St. James under any circumstances. Their work is at the intersection of several things we find essential to a just society: sexuality without judgment, economic justice, and universal access to healthcare.

But right now, they’re facing special challenges: Like a lot of nonprofits in San Francisco, they’re being forced out of their space. They’re looking at it as a blessing in disguise because they’ve outgrown the building they’re in, but it’s still a stressful time for them, and they can use the help.

Fundraising for the Fundraiser

To do this, we just need another $300. Anything more than that will go straight into the hands of St. James Infirmary. Despite all the serious talk, we intend to have a lot of fun with our Holiday Fun Time. Just as families don’t stop giving presents after the kids realize that Santa is a fake, the godless can have a great time during the holidays even without any gods, deities, angels, or spirits watching over them. We hope that you can join us, and please help out if you can. Anything – $5, $10, $20 – is a big step towards getting the holidays a little warmer.