December 24th, otherwise known to Christians as Christmas Eve, The Guardian gave atheists a Christmas present of a different kind: an article by Chris Arnade, who himself identifies as an atheist, titled  “The people who challenged my atheism most were drug addicts and prostitutes.”

As you may have noticed, the article was a huge success on the Internet. It got over 25,000 Facebook likes. It also got reprinted by Alternet, whose Facebook posting seemed to perfectly sum up the main thrust of the Internet’s response to the article: “WOAH. Interesting take on atheism. Do you agree with the author?” [media-credit name=”Facebook Screenshot” align=”aligncenter” width=”504″] 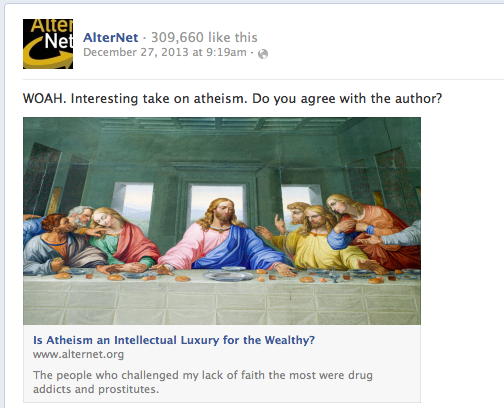 I had already seen a lot of posts cheering on Arnade’s article, but that one really struck in my craw, probably because of its mix of brevity and hyperbole. As I write below, there wasn’t anything new, innovative, or remotely “WOAH” about the article, certainly not to anyone with any depth of knowledge about atheism’s history or its present. Its basic argument is that atheism is an affectation of the rich and the privileged, but the poor and downtrodden need the relief that faith gives them.

That is, in fact, a very, very old argument, and to make it stand at all, one needs to resort to a tangle of straw men and stereotypes.

Via Twitter, I began to exchange criticism with Chris Arnade, and he (quite rightly) noted that this subject was far too big for the 140-character limits of Twitter. He offered to let me call him on the phone and discuss my thoughts directly, but I was bus-hopping most of the day, and opted instead to open up via email. Below is what I sent to him.