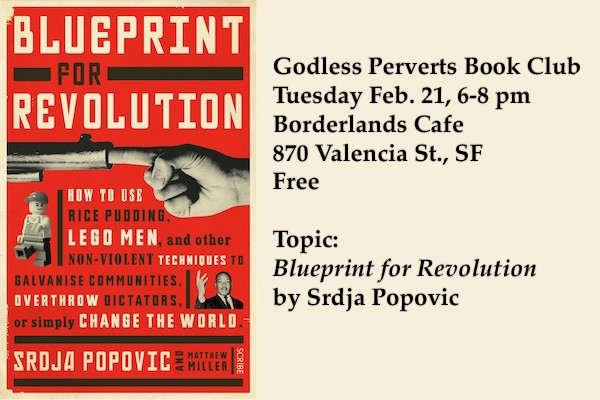 Godless Perverts Book Club is reading Blueprint for Revolution: How to Use Rice Pudding, Lego Men, and Other Nonviolent Techniques to Galvanize Communities, Overthrow Dictators, or Simply Change the World by Srdja Popovic. Popovic isn’t just being glib with the title: He was one of the founders of Otpor!, an anti-Milosevic resistance group in Yugoslavia during the late 90s and early oughts. Please join us!

This book opens us up to alternate forms of successful protests and actions. For those of us who remember the days of pieing as an effective form of protest, this should help expand our views further. For new people, why not learn new uses for rice pudding?

The Godless Perverts Book Club is at Borderlands Cafe, 870 Valencia St. in San Francisco. That’s on Valencia at 20th: it’s near the 24th and Mission BART, and it’s close to the parking garage on 21st and Bartlett between Valencia and Mission. Tuesday February 21 (it’ll be the third Tuesday of every month), 6:00 to 8:00 pm. It’s free: we ask that you buy food and/or drink to support the cafe if you can, but we understand that cafe prices are prohibitive for some people, so please don’t let that stop you from attending. We will be meeting at a large table in the back of the cafe.

Community is one of the reasons we started Godless Perverts. There are few enough places to land when you decide that you’re an atheist; far fewer if you’re also LGBT, queer, kinky, poly, trans, or are just interested in sexuality. And the sex-positive/ alt-sex/ whatever- you- want- to- call- it community isn’t always the most welcoming place for non-believers. So please join us! All orientations, genders, and kinks (or lack thereof) are welcome.