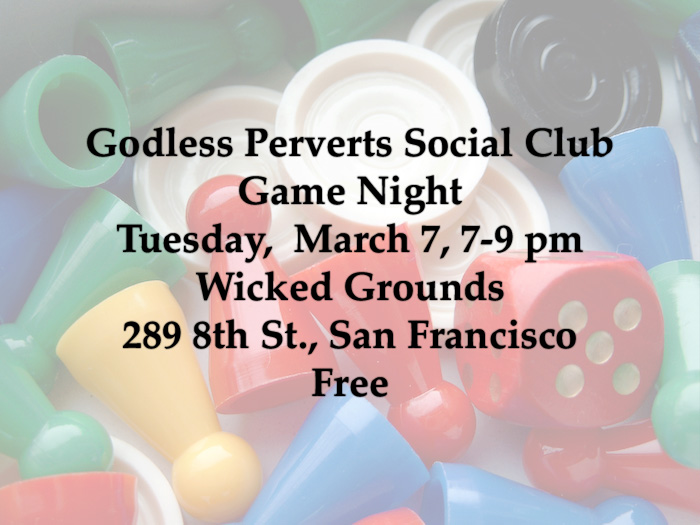 Godless Perverts is having another game night on Tuesday, March 7! 7-9 pm. These are big fun, and they’re becoming some of our most well-attended events. As you may have noticed, Wicked Grounds has a huge stash of games including chess and checkers, Cards Against Humanity,1 Scrabble, Fluxx, Slash, Gloom, Snake Oil, and much, much more. Feel free to bring your own games if you’re not sure that Wicked Grounds has a copy of your favorite.

So please join us at Wicked Grounds, the kink cafe and boutique, at 289 8th Street at Folsom in San Francisco (near Civic Center BART). 7-9 pm. Admission is free: if you can’t afford cafe prices, Wicked Grounds customers have bought coffee and tea for you, just ask for your beverage to be paid “from the wall.” Wicked Grounds has beverages, light snacks, full meals, and milkshakes made of literal awesome sauce. We meet at Wicked Grounds on the first Tuesday of every month, for topical discussions, general chat sessions, or game nights.