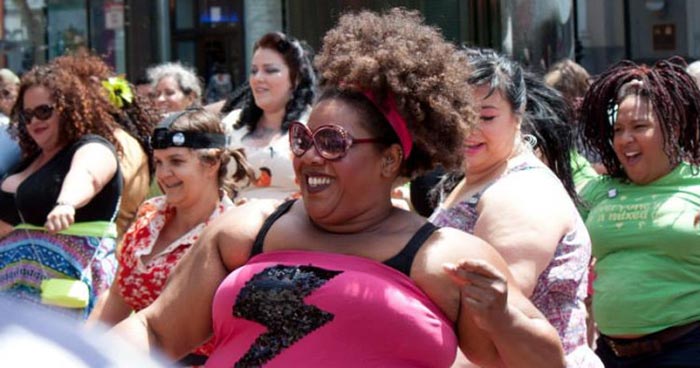 One of the most important reasons that Godless Perverts organizes events is that we think that atheism should make a difference in the lives of people here in the real world. It’s not an academic or intellectual thing for us: any discussion about atheism or sexuality ultimately comes down to how well we treat the people around us.

Now one of our friends is having a lot of trouble with her health, and we’d like anyone who can to help her out. Juicy D. Light is the founder of Rubenesque Burlesque, body positive activist, and an all-around great person. She’s also an atheist and comes to our Godless Perverts Social Clubs in San Francisco. Early in March, she was admitted to a hospital in Oakland with four — FOUR!! — bites from a brown recluse spider. A single bite from a brown recluse can be pretty serious. Four is bad shit. In addition, while she was in the hospital she got an MRSA infection (an antibiotic-resistant variety of staph) and sepsis.

Juicy’s at home now, recovering with the help of a lot of great friends. However, she’s still getting bitten in the ass by the shitty lack of support services we have in this country for people who get sick. Being at home means that Juicy’s not working and that means that she’s having a lot of money problems at the very time that she can afford them least.

This is a really common problem in the United States, and while the system isn’t there for Juicy (or the rest of us), her friends certainly are. They’ve established the “Saving Juicy’s Ass Fund” at GiveForward. The money is going to help Juicy out with the essentials, such as rent, food, and medical expenses. If you doubt that Juicy’s done great things for her community, check out the video below showing Rubenesque Burlesque performing their routine “Camp” at the Burlesque Hall of Fame last year. Definitely not safe for work, especially near the end, but extremely entertaining. Juicy is the dancer second from the left near the beginning of the show.