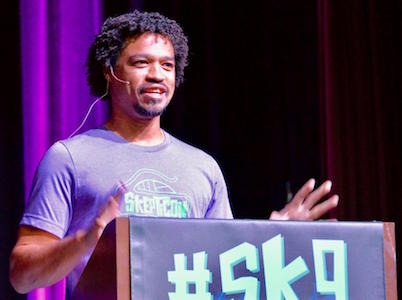 Victor Harris has been a staple on the Bay Area poetry scene for the past twelve years, featuring at various venues in Oakland and Berkeley, he was on the finals stage in Oakland in 2003. He is the recipient of the 2001 Frederic C Fallon Award for poetry from Chabot College, and a 2006 graduate of Cal State University Hayward with a B.A. in Liberal Studies. Victor is excited to be a part of the group of artists behind Mad Art Lab, where art meets science and skepticism. He has been writing and performing atheist/skeptical/rational/science themed poetry for over four years. When he’s not writing, or performing, he is the talent behind Reuschelle’s Cheesecakes and won a Best of the Bay award from the East Bay Express in 2009.