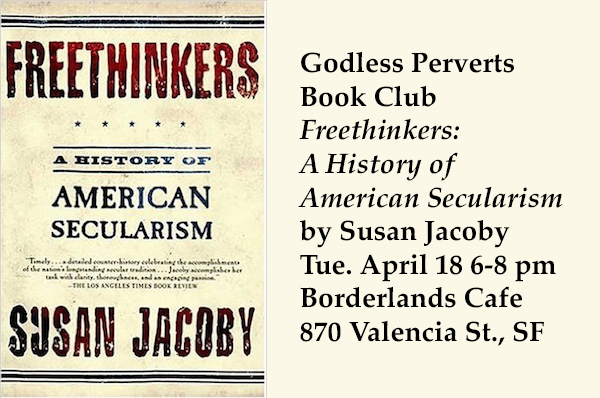 In impassioned, elegant prose, celebrated author Susan Jacoby paints a striking portrait of more than two hundred years of secularist activism, beginning with the fierce debate over the omission of God from the Constitution. Moving from nineteenth-century abolitionism and suffragism through the twentieth century’s civil liberties, civil rights, and feminist movements, Freethinkers illuminates the neglected accomplishments of secularists who, allied with liberal and tolerant religious believers, have stood at the forefront of the battle for reforms opposed by reactionary forces in the past and today.

The Godless Perverts Book Club is at Borderlands Cafe, 870 Valencia St. in San Francisco. That’s on Valencia at 20th: it’s near the 24th and Mission BART, and it’s close to the parking garage on 21st and Bartlett between Valencia and Mission. Tuesday April 18 (it’ll be the third Tuesday of every month), 6:00 to 8:00 pm. It’s free: we ask that you buy food and/or drink to support the cafe if you can, but we understand that cafe prices are prohibitive for some people, so please don’t let that stop you from attending. We will be meeting at a large table in the back of the cafe.

Community is one of the reasons we started Godless Perverts. There are few enough places to land when you decide that you’re an atheist; far fewer if you’re also LGBT, queer, kinky, poly, trans, or are just interested in sexuality. And the sex-positive/ alt-sex/ whatever- you- want- to- call- it community isn’t always the most welcoming place for non-believers. So please join us! All orientations, genders, and kinks (or lack thereof) are welcome.