I’ve been pondering the question of whether I should keep using the word “bisexual” to describe myself, or whether I should start using “pansexual” instead. I wanted to run the pros and cons by y’all and get feedback.

On the one hand: The word “bisexual” feeds into the gender binary, in a way that I don’t feel comfortable with. It implies that either (a) there are only two genders, or (b) there are more than two genders, but I’m only attracted to two of them. Neither of these is correct. I accept the existence of people who don’t identify on a gender binary — and there are non-gender-binary-identifying people who I think are hot. “Pansexual” would be a more respectful word, and it would be more accurate.

On the other hand: Most people more or less know know what the word “bisexual” means. Far fewer people know what “pansexual” means. I’m very much a pragmatist when it comes to language: given a choice between (a) a word that means exactly what I want to say but that only ten people will understand without looking it up, and (b) a word that doesn’t quite mean what I want to say but that comes close and that almost everyone who speaks English will understand, I’ll almost always choose (b). It’s part of being an accessible, conversational writer. (It’s one of the reasons I tend to avoid words like “humanist” and “freethinker” unless I’m talking with other godless folks: there are contexts where “humanist” is a slightly more accurate description of the particular facet of godlessness I’m expressing at that particular moment, but I don’t always want to derail the conversation with a ten-minute explanation of what exactly “humanism” is.)

On the other other hand: The only way people are going to learn about pansexuality is if people use the word. Using the word is what will make it more widely understood.

On the other other other hand: I’ve self-identified as bisexual for a long time, and it’s become a political and cultural identity as well as a personal one, having to do with my particular relationship with the LGBT community. I have a longish history of being one of the people pushing for recognition and respect of bisexual people, both outside the LGBT community and within it. And I think bisexual visibility is important — again, both in and out of the LGBT community. That matters to me, and I’m somewhat reluctant to let it go.

On the other other other other hand: There’s no reason I can’t become one of the people pushing for recognition and respect of pansexual people, both outside the LGBT community and within it. Who knows — in twenty years, that might be an important part of my personal, political, and cultural identity. 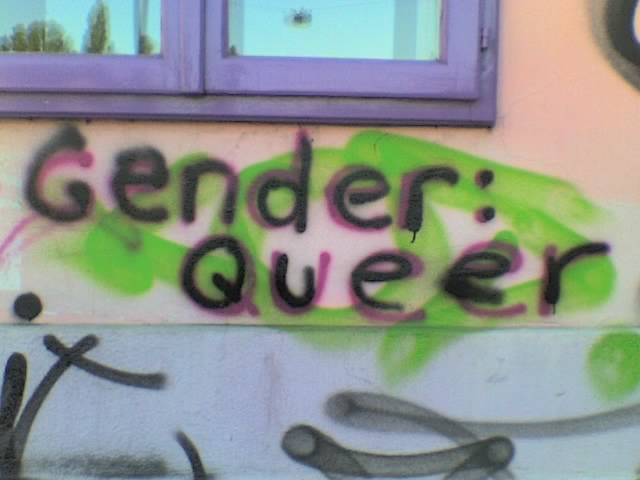 The side of the Rosa Lila Villa LGBT Center in Vienna (Charles Hutchins, Creative Commons)

I’m toying with the idea of saying “Bisexual — well, pansexual, actually,” which opens the door to at least a short discussion of what pansexuality is and the rejection of the gender binary. Again, I don’t always want to derail the conversation with a ten-minute explanation of what exactly “pansexual” means… but at least sometimes, that might be worth it.

(Oh, for the record: I’m not hugely interested in the “Why do you even need labels?” argument. I’m a writer. I care about language. We need language to talk about who we are.)