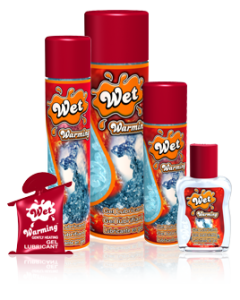 One reason that sex just might be better without religion is that you only have to worry about things like pregnancy, STI’s, negotiating consent, whose house you’re going to sleep (or not sleep) at, putting the keys to the handcuffs in a safe place, and making sure that no one’s allergic to the toys, gloves, dental dams or condoms. After all that, at least you don’t have to worry about whether your lube conforms to dietary codes from the Bronze Age.

Apparently, this is something that some Orthodox Jewish rabbis do think about, though. Members of the Rabbinical Council of California came within inches of certifying Wet brand lube as kosher. On the basis of their upcoming certification, Wet‘s parent company, Trigg Laboratories, was planning to launch the product in Israel.

But it was not to be. After several days of general amusement on blogs, Twitter, and nighttime talk shows, the RCC pulled their approval of Wet on July 18th. The reasons are still somewhat unclear. The RCC released the following statement, which says in its entirety:

As reported in the media, the Rabbinical Council of California’s Kashrut Division was in the final stages of certifying products produced by Trigg Laboratories. Certification of non-edible items is common in the kosher industry, but the intended uses of these items as now revealed, was misunderstood. The RCC has rescinded its certification with immediate effect, and deeply regrets the widespread consternation that this error caused.

So the natural question is: what exactly did the RCC think that the lube was for, and what did they suddenly decide was objectionable? It took two years for Trigg Labs to go through the certification process. According to Trigg’s original press release, the process not only included inspection of the company’s 52,000-square-foot plant, but verifying the providers of the raw materials that go into the lube. At this point, the RCC has no excuse for not being able to recite the details of lube manufacture and use at least as well as a diligent 13-year-old reciting the Torah portion at their Bar/Bat Mitzvah.

Nevertheless, something cropped up in between the 16th and the 18th of July to make the RCC decide that those two years were all for naught and that they’d be better off just paying back all the fees that they’d gotten from Trigg. Citing a post from The Atlantic, The Jewish Telegraphic Agency speculates that the sudden change of heart might have had to do something with the fact that Wet is a very popular brand with gay men, and that Trigg was hoping to market their brand among gay men in Tel Aviv. If that’s so, neither the RCC or Trigg are saying; some things are just meant to stay impenetrable.

Even without the RCC’s approval, Wet is apparently not completely treyf. Trigg will continue to market it as a “self-certified kosher” product:

“Regardless of RCC’s reversal of the certification they granted a few days ago, our kosher qualification has not changed,” said Trigg, “therefore, we will use the ‘K’ symbol on all products they previously approved as being kosher.” The 80+ Wet lubricants manufactured at Trigg Labs’ FDA-inspected medical device manufacturing facility in Valencia, California, boast exceptional purity, consistency and comfort levels. Trigg explained, “As previously stated, the ‘K’ imprint on our packages says that we maintain the highest standards of purity and answer to a higher authority.”