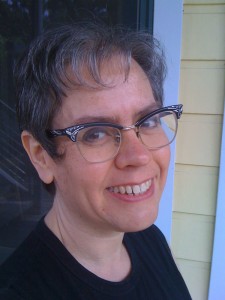 Greta Christina has been writing professionally since 1989, on topics including atheism, sexuality and sex-positivity, LGBT issues, politics, culture, and whatever crosses her mind. She is author of The Way of the Heathen: Practicing Atheism in Everyday Life, of Comforting Thoughts About Death That Have Nothing to Do with God, of Coming Out Atheist: How to Do It, How to Help Each Other, and Why, of Why Are You Atheists So Angry? 99 Things That Piss Off the Godless, and of Bending: Dirty Kinky Stories About Pain, Power, Religion, Unicorns, & More, and is editor of Paying For It: A Guide by Sex Workers for Their Clients. She is a regular contributor to AlterNet, The Humanist, and Free Inquiry magazines. Her writing has appeared in multiple magazines and newspapers, including Ms., Penthouse, Chicago Sun-Times, On Our Backs, and Skeptical Inquirer, and numerous anthologies, including Everything You Know About God Is Wrong and three volumes of Best American Erotica. She is a co-founder and member of The Orbit, the atheist social justice blogging collective. She is on the board of directors of Foundation Beyond Belief, the humanist organization for charitable giving, and is co-founder and co-organizer of Godless Perverts. She lives in San Francisco with her wife, Ingrid. You can email her at gretachristina (at) gmail (dot) com, and follow her on Twitter at @GretaChristina.

HungryFEED can't get feed. Don't be mad at HungryFEED. SimplePie reported: A feed could not be found at http://freethoughtblogs.com/greta/feed/. A feed with an invalid mime type may fall victim to this error, or SimplePie was unable to auto-discover it.. Use force_feed() if you are certain this URL is a real feed.