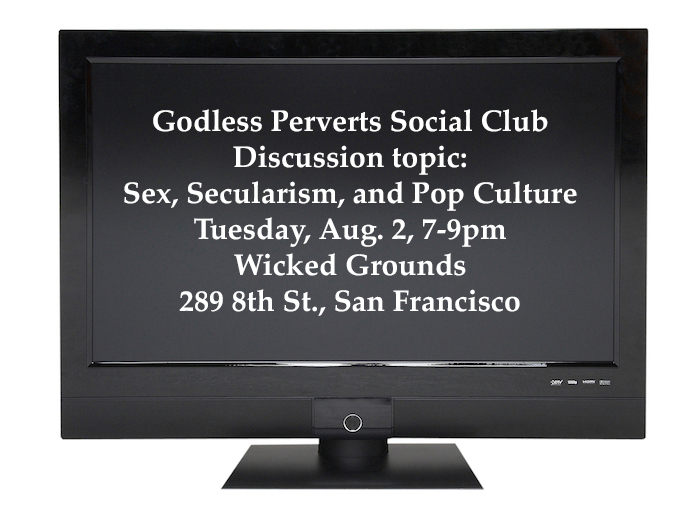 We’re having a Godless Perverts Social Club in San Francisco on Tuesday, August 2! We have a specific discussion topic this time: Sex, Secularism, and Pop Culture. How have religious values shaped our pop culture depictions of sex and gender? Why are atheists in pop culture so often depicted as cerebral and socially inept, with difficulty connecting to others — sexually or otherwise? Are there counterexamples? How can atheists and atheist communities push back? Join Godless Perverts for a fun, lively discussion of sex, gender, religion, and atheism, in movies, TV, video games, music, and more.

Community is one of the reasons we started Godless Perverts. There are few enough places to land when you decide that you’re an atheist; far fewer if you’re also LGBT, queer, kinky, poly, trans, or are just interested in sexuality. And the sex-positive/ alt-sex/ whatever- you- want- to- call- it community isn’t always the most welcoming place for non-believers. So please join us! Hang out with other nonbelievers and chat about sex, sexuality, gender, atheism, religion, science, social justice, pop culture, and more. All orientations, genders, and kinks (or lack thereof) are welcome.

We meet on the first Tuesday of every month at Wicked Grounds, 289 8th Street at Folsom in San Francisco (near Civic Center BART). (We also meet on the third Thursday of every month at Rudy’s Can’t Fail in downtown Oakland.) 7-9 pm. Admission is free, although we do ask that you buy food and/or drink at the venue if you can: Wicked Grounds has beverages, light snacks, full meals, and milkshakes made of literal awesome sauce.

If you want to be notified about all our Godless Perverts events, sign up for our email mailing list, follow us on Twitter at @GodlessPerverts, or follow us on Facebook. You can also sign up for the Bay Area Atheists/ Agnostics/ Humanists/ Freethinkers/ Skeptics Meetup page, and be notified of all sorts of godless Bay Area events — including many Godless Perverts events. And of course, you can always visit our Website to find out what we’re up to, godlessperverts.com. Hope to see you soon!