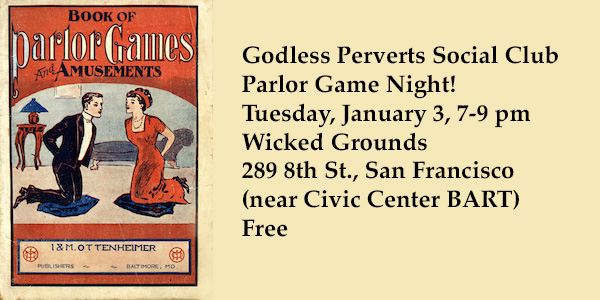 We’re having Game Night at the Godless Perverts Social Club, at Wicked Grounds in SF on Tuesday, January 3. Our game nights in San Francisco are among our most popular events, and we’re doing something different this time! We usually do tabletop games at our game nights — but we did parlor games once in our Oakland location, and people have asked for more of it. So on January 3, we’re doing parlor games!

We’ve compiled a list of games that can be played sitting in one place, with no equipment other than paper and pen (which we’ll provide). And some games don’t even need that! Just people, words, and brains. Scroll to the end of this announcement to see a list of games, with brief summaries — or just click here. And if you have favorites that aren’t listed, please let us know!

The Social Club will be on Tuesday, January 3, 7-9 pm, at Wicked Grounds, 289 8th St. in San Francisco (near Civic Center BART). Wicked Grounds has beverages, light snacks, full meals, and kickass milkshakes. If you want to attend and can’t afford cafe coffee prices, Wicked Grounds customers have bought beverages “for the wall,” so anyone who wants to can hang out there without worrying about cost.

Community is one of the reasons we started Godless Perverts. There are few enough places to land when you decide that you’re an atheist; far fewer if you’re also LGBT, queer, kinky, poly, trans, or are just interested in sexuality. And the sex-positive/ alt-sex/ whatever- you- want- to- call- it community isn’t always the most welcoming place for non-believers. So please join us! Hang out with other nonbelievers and chat about sex, sexuality, gender, atheism, religion, science, social justice, pop culture, and more. All orientations, genders, and kinks (or lack thereof) are welcome.

If you want to be notified about all our Godless Perverts events, sign up for our email mailing list, follow us on Twitter at @GodlessPerverts, or follow us on Facebook. You can also sign up for the Bay Area Atheists/ Agnostics/ Humanists/ Freethinkers/ Skeptics Meetup page, and be notified of all sorts of godless Bay Area events — including many Godless Perverts events. And of course, you can always visit our Website to find out what we’re up to, godlessperverts.com. Hope to see you soon!

Telephone. The classic, and a good game for skeptics. One person whispers a short phrase to the next person, who then whispers what they heard to the next. The last person says the sentence they heard out loud.

Don’t Get Me Started. Each player in turn is given a topic to rant about, presumably a pretty innocuous one, and then makes up a complaining rant about it.

Outright Lie. Players pass a small object around the circle (or simply identify an object) and make up incredible stories about it. Example: “This necklace was buried in my grandmother’s yard in a sealed envelope from an anonymous lover.” If you want to keep score, the players vote on the best story.

If You Were A Tree… Each player in turn thinks of a famous person. Other players try to guess who they’re thinking of by asking questions like, “If you were a tree, what kind of tree would you be?” “If you were a food item…” “If you were a building…”

Boticelli. Sort of like Twenty Questions. Each player in turn thinks of a famous person (alive or dead) who all the other players will be familiar with. They say the first initial of that person’s last name (e.g., if you’d picked Boticelli, you’d say, “I’m a B.”). The other players get a chance to ask a yes-or-no narrowing down question, by making guesses that might stump the “judge.” (Example: “Were you a catcher for the Cincinnati Reds?” If the “judge” says, “No, I am not Johnny Bench,” they don’t get a yes-or-no narrowing down question. If the “judge” doesn’t know who the guesser is asking about, the guesser gets a yes-or-no narrowing down question (like, “Are you alive?” “Are you in the arts?” “Are you a woman?”) Once the field has been narrowed, stumping questions have to fit the narrowed field (i.e., once it’s been determined that the person is alive, guessers can’t ask stumping questions about dead people).

And of course, there are various variations on group storytelling.

If paper and pens are a workable option, some other options are:

Telephone Pictionary. Each player starts with a piece of paper and a pencil. At the top of the paper, each player writes a sentence. Then they pass the papers to their left. The next player “draws” the sentence a la Pictionary, then folds the paper so only the drawing is visible and passes it to their left. The next player looks at the drawing and writes a sentence that they think the drawing represents. This continues until all players have their original paper back, and players read the garbles sentences out loud.

Story Train. Each player writes a sentence and passes it on to the next player, who does the same, folding the previous sentence over so each new player can only read one previous sentence. When everyone’s written on every paper, the pieces are read out loud.

Exquisite Corpse. Each player writes down a word, folds the paper, and passes it to the next player, who then writes another word and repeats. All players choosing words that are in the same part of speech at the same time (i.e., all sentences will end up in the structure “adjective, noun, verb, adjective, noun.”) Sentences are read out loud.